Recently, Keating has been making domestically scaled paintings. Following a year of creative experimentation and marking a transition in technique, these new works have been built with many layers of colour and textural materials. Their surfaces hold an intense depth and richness, giving the series a meditative quality that invites slow and reflective viewing.

Keating has exhibited extensively in galleries and created numerous large-scale, site-responsive art projects in Australia and internationally since 2004. He has undertaken numerous large-scale painting commissions in public spaces, including the National Gallery of Victoria, Melbourne (2013), the Adelaide Festival Centre (2015) and Sydney’s Domain (2018). His works are held in many public and private collections including the NGV, NGA, MCA, AGNSW, MUMA and Artbank.

The exhibition will be accompanied by a public mural in St Kilda commissioned by the City of Port Phillip. 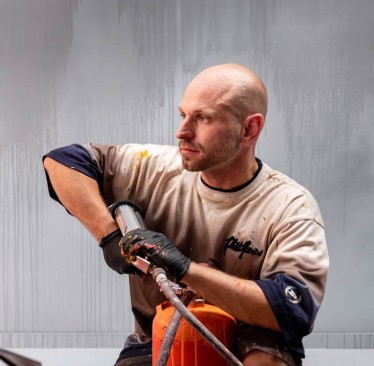 I am positioning a body of work as a means to reflect change, like the seasons, like the way we as a society have endured significant change over the course of this past year and equally as individuals. I hope these works will be able to provide a space for the viewer to connect with themselves, physically and metaphysically.
Ash Keating, 2020


Also showing
at the same time

Troy Emery’s practice encompasses sculpture, painting, and drawing. Emery’s artwork explores the way that representations of animals can be used as decorative motifs, superficial icons for ecological issues or fetishised objects of adornment and entertainment.

Nicholas Folland’s practice explores the relationship between domestic objects and materials, natural forces and historical references. His work speaks to uncertainty, ecological fragility and our perception of time.